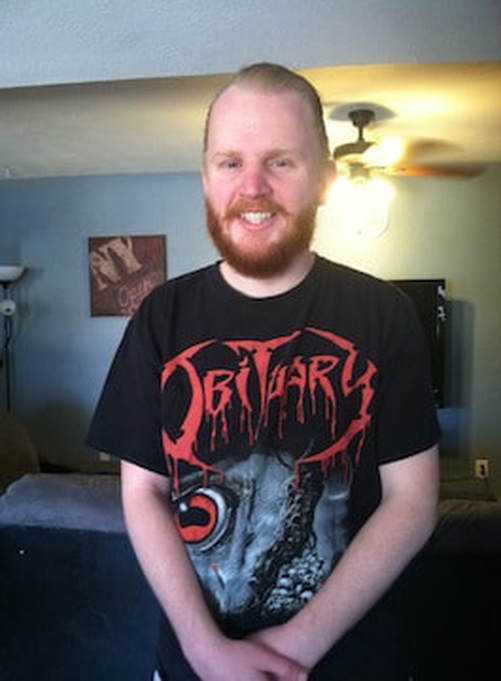 A native Angeleno, Sean has been engaging in the serious business of writing for the last several years.  In the spring of 2015, he was a paralegal major at West Los Angeles College, and he began writing his novel The Gitax War in TPI editor Nuala Mary Lincke's creative writing class at West.  During the class, he was surprised at the praise his work garnered: "You write like a seasoned fantasy writer: the brief--almost laconic--descriptions.  Not a word wasted."
We'll see where life takes Sean--or where Sean takes life.
___________________________
Prologue

Two men holding dim-lit lanterns trudged knee-deep in the marshes of Sulghoul. The first man was a middle-aged man with a lanky build, and a hardened face. The second man was a much younger, heavy-set man.
"Uncle Ruffus, why are we going so deep into Luna's territory?" Asked the young man.
"Because your mom wanted me to take you on a grave robbing trip, and I figured going this deep into Sulghoul will do some good for you"
"Why go this deep with just a few shovels, and a puny dagger?" Asked the young man, who was looking around nervously.
The stern man waved his lantern around,"look around. Do you see any life in this sickly swamp?"
"Not yet, but I'm sure Bull Gators are lurking about."
"Nonsense child, Bull Gators dwell around Necromancers, Necromancers live in the Timid Swamp, thus Bull Gators live in the Timid Swamp. We are far from the Timid Swamp."
His uncle's words gave the young man a small sense of relief." But what of the Vampires?"
Ruffus laughed,"Vampires? Do you see castles or fortresses? Vampires like to own lands of worth; lands of immense value. This swamp is a vast nothingness."
"Fine, but what about-".
Ruffus interrupted Reevus, "Reevus, you're a fat coward. Your mom wanted me to bring you, because she thought it would strengthen you as a man. I thought you would be too much trouble. Was I wrong to bring you?"
Reevus straighten his posture,"no. I will make you proud."
Ruffus smiled,"good."
They went further into the slimy marsh. The two grave robbers were swatting at mosquitoes, while slowly making their way further into the swamp.
"Look uncle! A casket!" Shouted Reevus.
"Shhh," whispered Ruffus. "Good job son, but be more quiet next time."
"You said we had nothing to worry about."
"We are still in Luna's swamps, which means we still have to worry about Wolves, also we need to worry about the random Zombie."
"You never said anything about Zombies."
"You never asked."
Ruffus pulled the rotted casket onto solid land. He flips the lid carefully to reveal several coiled snakes. Reevus cowered away from the site of the snakes.
"Damn boy. Relax. These are common marsh snakes. If they were Ash Coil Snakes or Vampyres Vipers, then you should cower like a frightened puppy."
"Can't we sell these snakes to Necromancers or Hex Breakers?"
Ruffus laughed,"we would be lucky to get a copper piece." Ruffus slammed the coffin lid.
The two went hours without finding any caskets or ancient tombs.
"Maybe we should leave uncle. We are getting awfully further into this wretched bog."
The old man sighed,"maybe."
Something gleamed in Reevus' eyes." Uncle what is that?"
Ruffus made his way to what looked like a silver pod."I don't know boy, but we may have hit pay dirt. Help me pull this thing out of the marsh."
Both men pulled with all their might. It took them a good ten minutes to pull the pod from the grasp of the murky swamp. They dragged the pod against a dead oak tree.
"Uncle, what type of metal is this?"
"No idea, but it looks to be very fine quality. Never seen this type of metal before."
"Should we open it?"
"I think so, but it may be tough to get into to." Ruffus examined the silver pod to find strange buttons, and a moss covered handle. He knew not what any of it was.
"How do we get into to it without breaking it?" Asked Reevus.
"Oh don't worry this a fine steel; nothing can break it," said Ruffus as he slams his hand onto the pod.
The pod creaks open, and a gray gas leaks from the pod." The hell," said Ruffus. Ruffus opened the pod door, and suddenly a gray oil bursted from the pod engulfing Ruffus and Reevus.
Reevus flailed like a fish out of water." Uncle! What the hell is going on? I can't breathe."
Ruffus was choking on the oil,"boy.... run.... get the damned hell out of here." Ruffus clawed his way out of the murky waters, and made his way to a spongy patch of land.
Ruffus heard voices in his head." Rejoice human filth. You have ushered in a new era of Gitax life, and for that we grant you new life."
Ruffus clawed at his throat; his eyes oozed a gray sickly oil. "I knew this was a bad idea," murmured Ruffus as he blacked out.
Reevus ran as fast as he could. The Owls mourned the death of their swamp, and the Vultures mocked the young man. "You can't escape us, pitiful youth. All you can do is embrace our gift to you," said a voice that seemed to come from everywhere.
A skeletal being with long blonde hair appeared in front of Reevus. Gray ooze poured from the skeletal beings eyes and mouth." Come let mother help," moaned the skeleton.
"No! Stay away!" Shrieked Reevus. The skeleton walked toward Reevus.
The young man ran, but stumbled on a log. Before he could get up, the skeletal being was on him. The skeleton clawed Reevus, then planted its teeth into Reevus' skull. Reevus screamed in utter terror.